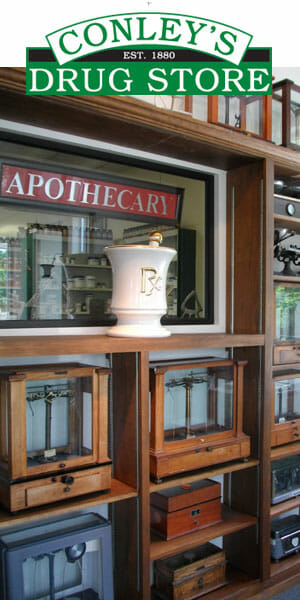 In 1880, Brainard Conley opened two different drug stores in Newburyport, Conley and McManus and Conley Mannix which both went out of business in 1891. In 1901 Brainard Conley purchased the E.F.Brown. drug store in Ipswich and moved it to Central Street. When he died in 1931 he left the business to his wife and sons. Eventually John Conley became the sole owner and later renamed the store Conley's and moved the store down the street to the corner of Central and Hammett Streets. In 1970 he sold the business to Richard Banville. In 1986, Richard and Marlene Doyle, both former employees of Conley's Drug Store, purchased the business from Richard Banville. In 1996 Conley's moved to its present location in the Shaw's Plaza at 146 High Street.

Owners, Marlene and Richard Doyle along with their experienced staff are known for their work with customers and physicians to find the best solutions for the customers' health care needs.